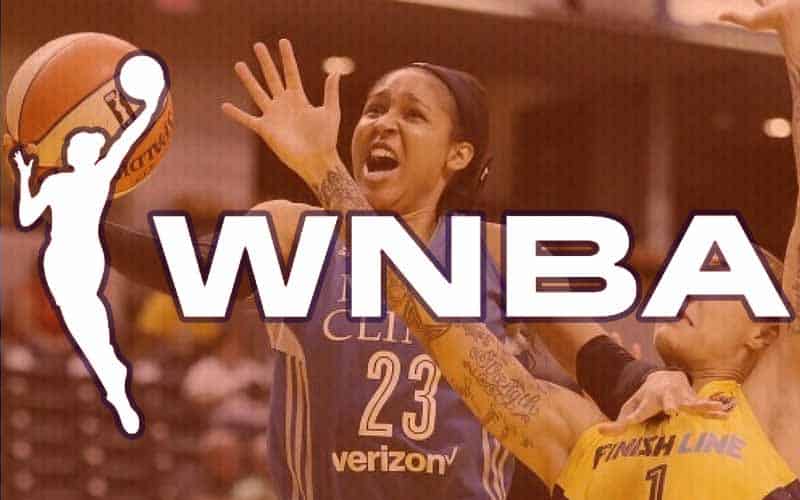 The 2019 WNBA season tipped off only a month ago, and despite a slow start, the Las Vegas Aces remain the favorites to win the championship.

Picked as this season’s favorites at the beginning of the year at +250 (or a 28.57% chance to win), the Aces are now listed at +240 (29.41%) and sit in second place in the Western Conference behind the talented frontcourt of A’ja Wilson and Liz Cambage, who is just beginning to hit her stride after an early season injury.

But the Eastern Conference-leading Connecticut Sun, currently ranked number one in the WNBA Power Rankings, are closing the gap at +260 (27.78%) after starting the season with +700 (12.50%) odds to win it all.

The Suns have been red hot to start the season, which includes a seven-game win streak this season; no other team has more than seven wins for the entire season.

Center Jonquel Jones has thrived in the starting lineup and if she can continue her dominance in the post — averaging 16.7 points per game  — then the 2018 Sixth Woman of the Year could lead her team to a number one seed in the playoffs.

This season’s biggest surprise, however, are the Seattle Storm.

Of course, losing 2018 MVP Breanna Stewart for the entire season with a ruptured Achilles and veteran guard Sue Bird due to a knee injury were two devastating blows to the Storm and the team’s chances this season.

However, it has not stopped the Storm’s surge to the top of the Western Conference. With the return of head coach Dan Hughes following cancer surgery, the resilient Storm have a chance to repeat this year and have seen their odds increase to +1400 (6.67%).

The Washington Mystics started the season with +300 (25%) odds and continue to impress. Sitting in second place in the Eastern Conference, the Mystics are leading the league in scoring — averaging 85.9 points per game — behind Elena Delle Donne’s 16.4 points per game.

The Los Angeles Sparks, another team given +300 (25%) odds to win the championship, are not sharing the same success.

Despite the return of Candance Parker to the lineup, the Sparks and first-year coach Derek Fisher are still trying to find their identity while sitting in the fourth spot in the West and seeing their odds fall to +650 (13.33%).

The Atlanta Dream, who opened among the contenders at +700 (12.50%), have seen their season become a nightmare as they continue to slip further from the reality of winning a title and into the longshot depths of mediocrity at +4000 (2.44%) odds.

Facing issues with a disgruntled Angel McCoughtry, the Dream need to turn team and player frustrations into motivation, according to forward Monique Billings. The Dream are currently last in the Eastern Conference standings.

With two-thirds of the regular season still remaining, there’s still time for any team to turn things around and make a playoff push.

For now, here’s who oddsmakers believe have the best and worst chance to win the 2019 WNBA Finals.