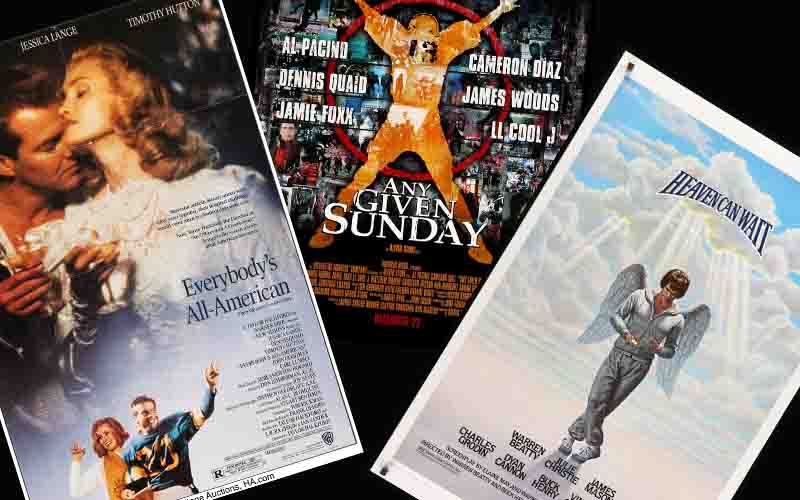 While the Super Bowl may be the most-watched event on the sports calendar each year, there are not many significant movies involving the big game as a major component of the plot.

In advance of the NFL Playoff betting beginning this weekend, we’ve provided some of our top suggestions for the best Super Bowl movies of all time.

While these films may not focus on or directly involve Super Bowl betting, the final NFL game of the season is involved in some way.

Warren Beatty plays Joe Pendleton, the backup quarterback for the Los Angeles Rams that can never seem to catch a break and become the team’s starter. In a fluke accident, Pendleton dies, but is offered a second chance at life when it is determined by his guardian angel that he was not destined to pass away until years later.

The laughs begin when Pendleton must select a new body because his previous one was cremated. He needs to not only find an athletic candidate to take possession of, but also get into shape and onto the Rams’ roster in time for the Super Bowl.

Dennis Quaid stars as Gavin “Grey Ghost” Grey, an All-American running back and defender for a college that is strikingly similar to Louisiana State University (LSU).

After a stellar NCAA College Football career, Grey is drafted by the Washington Redskins where he becomes just another player and is no longer the focus of fans’ adoration.

The film does qualify as one of our top sports betting movies because Grey’s collegiate teammate, Ed “Bull” Lawrence played by the immortal John Goodman, gets into deep trouble due to acquiring gambling debts and presents a scenario that even the Grey Ghost cannot hurdle.

The film also stars Jessica Lange and Timothy Hutton, as is a largely forgotten film despite a quality cast and solid direction –  give it a watch!

Dennis Quaid is back again, this time as an aged quarterback in Oliver Stone’s Any Given Sunday. Al Pacino stars as Tony D’Amato, head coach of the Miami Sharks who must decide on whether to start Jack “Cap” Rooney (Quaid) or the youngster Willie Beamen (Jamie Foxx).

At the time of release, Quaid most closely resembled the situation of an aged Dan Marino, while comparisons could also be made between Foxx and Michael Vick, as well as Pacino and Jimmy Johnson.

The film lacks some finesse but makes up for it with stark elements of a pro football franchise from behind the scenes. Any Given Sunday also stars Cameron Diaz as the team owner’s daughter, rapper LL Cool J as the starting running back who is frustrated with Beamen’s antics, and James Woods as the team physician who ensures that players are ready to suit up by any means necessary.

IMDB Pages For Heaven Can Wait, Any Given Sunday, Everybody’s All American, Ace Ventura: Pet Detective, Two-Minute Warning, and Number One