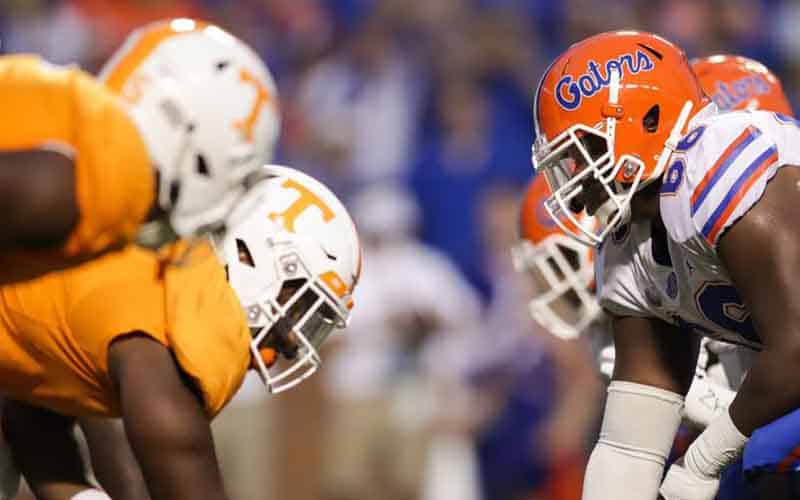 The Georgia Bulldogs and Alabama Crimson Tide are the two top ranked teams in college football, and both of them are favored to best their opponent this weekend by 40 or more points.

There are, however, two key Power Five Conference matchups that will propel the winners upward in the top of the AP Top 25 rankings and temporarily spoil the losers chance at a CFP Championship.

Tomorrow at 3:30 PM, the 2-1 Florida Gators are 10.5 point road underdogs to the Tennessee Volunteers. The Gators are the 20th ranked team at the moment and have already dropped a game to the Kentucky Wildcats.

After blowing out Ball State and then an overtime win against the Pittsburgh Panthers, the Gators represent the first real test for the 11th ranked Volunteers. Lines for college football betting suggest that Tennesseee should have no problem winning the game at home, but will they?

The Vols are also ahead of the Gators in the NCAAF futures odds to win the SEC. While Tennessee is the third most likely program to win the SEC in 2022, the below moneyline odds reveal that the Volunteers have an astronolmically low chance of leapfrogging Alabama or Georgia.

Kicking off at noon tomorrow, two undefeated ACC squads will battle for conference supremacy. Both the Wake Forest Deamon Deacons and Clemson Tigers enter the game with 3-0 records, and the home team is projected to lose by a touchdown.

Although the ACC Champion is typically awarded a spot in the final CFP bracket, that didn’t happen last year because the stregth of conference was too low and the title-holder, Pittsburgh, held two losses.

The Clemson Tigers are heavy favorites to win the ACC in 2022, and tomorrow’s game against Wake will serve as a barometer for the entire conference as both programs have yet to face a significant opponent this seaon.

Most futures odds that are on the board for College Football Playoffs betting suggest that both Alabama and Georgia will qualify as one of the final four teams competing for a National Championship this winter.

That only leaves two spots left the remainder of NCAAF to capture. One of the CFP seeds is normally dedicated to the winner of the Big Ten which is almost always Ohio State.

Clemson has routinely qualified for the playoffs as the winner of the ACC, but last year that seed was granted to the Cincinnati Bearcats of the American Athletic Conference.

After Wake Forest, Clemson will next play the 12th ranked North Carolina State Wolfpack, and will not face another ranked opponent until November 19th when they play the Miami Hurricanes.