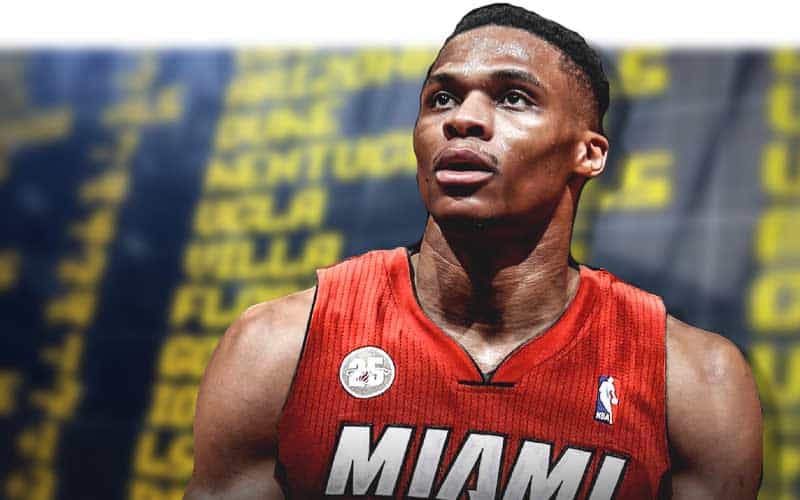 There are several possible destinations for Russell Westbrook, but the latest odds say those teams will have to beat the Heat to get him.

The Miami Heat are the heavy favorites to land the 2017 NBA MVP, and oddsmakers predict Westbrook will join forces with the recently acquired Jimmy Butler in South Beach.

The Oklahoma City Thunder began shopping Russell Westbrook after Paul George was traded to the Los Angeles Clippers to team up with Kawhi Leonard.

Westbrook is due $170 million over the next four years. While his contract is deterring some teams, others are expressing interest in the triple-double machine.

Here are the teams that oddsmakers believe Westbrook could potentially play for when the 2019-20 NBA season tips off.

Where will Russell Westbrook be traded?

There’s not a perfect situation for a Westbrook trade since every team, including the Thunder, have roster or cap space issues to resolve.

The Heat were able to sign free agent Butler this offseason but have little to surround the veteran All-Star.

Miami “appeals” to Westbrook, and for good reason.

President Pat Riley and Coach Erik Spoelstra are trying to bolster a roster in a city of great weather, culture, and no state income tax. These are key selling points for any superstar.

Miami’s major issue is the lack of cap space after the Butler sign-and-trade that may kill any possible Westbrook deal.

Another possible destination is the New York Knicks.

The Knicks missed out on all the big free agent names this year, including Kawhi Leonard, Kevin Durant, and Kyrie Irving.

New York has plenty of remaining cap space, plus young talent and first-round draft picks to offer to Oklahoma City for Westbrook. What they cannot offer is the chance to win.

Detroit was a playoff team in the 2019 postseason led by Blake Griffin. Now with new additions Markieff Morris and Derrick Rose, Detroit could capitalize on their forward momentum by acquiring Westbrook.

But again, questions linger about his contract, attitude, and the assets required to complete the trade for Detroit.

The longshot Timberwolves may not be such a longshot, especially for off-the-court reasons.

For Minnesota to get Westbrook, they would need to send Andrew Wiggins and his huge contract to Oklahoma City. Minnesota could also deal Jeff Teague’s expiring contract to help clear up cap space for the Thunder next year.

Most importantly, the acquisition of Westbrook could keep Karl-Anthony Towns happy enough in Minnesota to stay.

For years, franchise players in the NBA left teams in free agency or requested trades mid-season, a trend Minnesota wants to avoid with Towns.

With all this said, the future of Westbrook is still pure speculation. Until the deal is finalized, anything is possible.