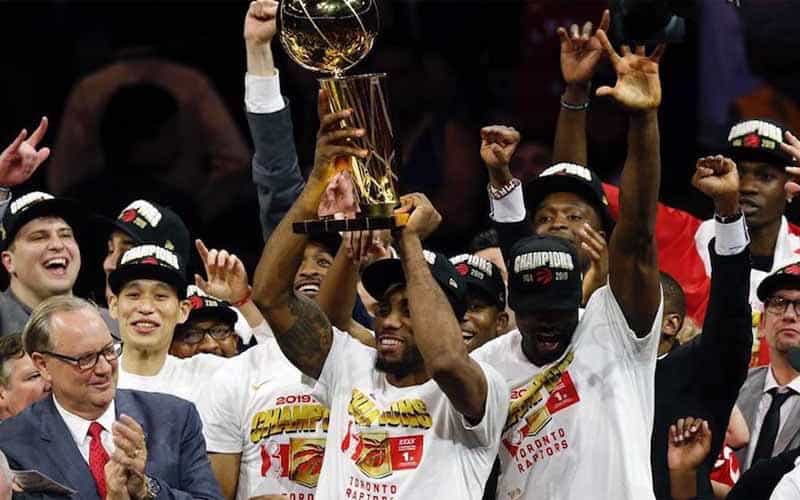 The Larry O’Brien Trophy is heading north to the home of the inventor of basketball for the first time in NBA history.

Before the 2018-19 season started, online sportsbooks opened the Warriors as the heavy betting favorites with -195 odds to win their 4th title in 5 years, while the Raptors were listed at +1400 and inside the top five.

And after the finals matchup was set between the two teams, oddsmakers pinned the Warriors as the favorite with -300 odds — equivalent to a 73.22% chance — to win the series, while the Raptors got the role as the underdog with +250 odds and a 26.78% chance to win it all.

In a thrilling, back-and-forth Game 6, a well-executed play coming out of a timeout all but ended the Warriors chances as Stephen Curry’s 3-pointer bounced off the rim in the final seconds.

Kawhi Leonard sunk his free throws, but with only 0.9 seconds remaining on the game clock, the free throws were all but irrelevant and merely delayed the Raptors celebrating their title on the road in the Warriors last game at Oakland’s Oracle Arena before moving to their new arena at the Chase Center in San Francisco next season.

Leonard finished the game with 22 points and earned the Bill Russell NBA Finals MVP Award for the second time of his career.

And here’s the highlights from the Raptors win over the Warriors if you missed Game 6 last night.

It was a historic win for the Toronto Raptors franchise, who became the first team outside the United States to win the NBA Championship.

It was also a homecoming for the game of basketball and the National Basketball Association — both of which have deep roots in Canada.

Dr. James Naismith, who was born in what is now Ontario, Canada, invented the game of basketball in 1891, and the first game in NBA history was played November 1, 1946, in Toronto.

NBA Commissioner Adam Silver said it best before presenting the Larry O’Brien trophy to the Raptors team, coaches, and ownership.

“Basketball has come full circle in Canada,” Silver said. It was invented by a Canadian, the first NBA game was in Toronto and now an NBA championship.”

Did Drake celebrate the Raptors win?

You bet he did.

And there are even a couple Drake-related prop bets available right now at Bovada.

Will Drake Perform During The Raptors Victory Parade?

Will Drake Receive A Championship Ring?

The 2019 NBA Finals may be in the books, but it’s never too early to start looking ahead to next season.

After the Raptors won Game 6, the opening odds to win the 2020 Finals were immediately posted, but there has since been an influx of public money that has caused a bit of chaos.

The Warriors opened as the favorite, but now — after it was revealed that All-Star guard Klay Thompson has a torn ACL — various online sportsbooks have updated their odds to have either the Milwaulkee Bucks or the Los Angeles Lakers listed as the favorite.

And with the constant free agent and trade talks happening around the NBA, it may be best to take a wait and see approach this year. For now, here are the current odds to win the 2020 NBA Championship, courtesy of BetOnline.

Odds To Win the 2020 NBA Championship