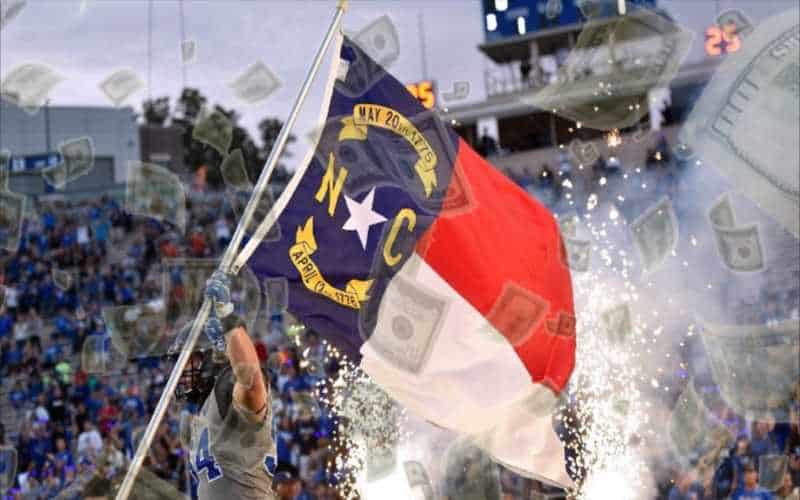 Lawmakers in North Carolina are giving serious consideration to the prospect of state-licensed sports betting. In August, the state’s Senate voted 26-19 to approve SB688. The bill would expand gambling privileges by extending sports betting to commercial operators.

North Carolina sports betting is already a reality at its several tribal-owned casinos. Still, legislators are pushing to make legal NC sports betting available all across the state.

And more than half of residents seem to agree with NC gambling expansion. East Carolina University’s Center for Survey Research conducted a poll in August that found 54% of North Carolinians to be in favor of sports betting.

SB688 would allow adults over the age of 21 to place wagers in-person at and around major sports venues. Additionally, players would be able to engage in limited mobile betting at the venues through the use of geofencing technology.

Licenses would be available for a total of 12 sportsbook operators, each subject to an 8% tax on all revenues. These revenues are expected to translate to approximately $24 million for the state.

The Direction of Betting Proceeds

Half of the tax revenues would be delegated to the North Carolina Major Events, Games, and Attractions Fund. Run by the Commerce Department, this group would use the money to finance concerts, political conventions, and sporting events.

The gambling law stipulates that the other half of tax revenues from sports betting would go to the state’s general fund. North Carolina’s general fund is most often used to support education and health and human services.

Legislators in the House seem eager to pass the bill when springtime rolls around.

“The fact is, people are already doing it. It’s not regulated. It makes sense to create a framework and allow people to do it legally. The state can collect tax revenue on it.”

While the House bill may contain slightly different details from that of the Senate, it is expected to be very similar in structure and design. And because of the bipartisan support in North Carolina, lawmakers see no issue with the bill’s passage in 2022.

A House Lacking in Solidarity

Even so, the Senate only passed the bill by a margin of seven votes. And anti-gambling fear remains present among many of North Carolina’s representatives. Supporters in the House will have to be diligent with their delivery of the proposal.

If the bill moves forward, North Carolinians will likely have access to legal NFL betting in time for the 2022-2023 NFL season.

Until then, residents can place wagers in-person at the state’s several casinos or online via offshore betting sites. For more information on legal sportsbooks and legal betting, be sure to stick around and browse here on SBL.