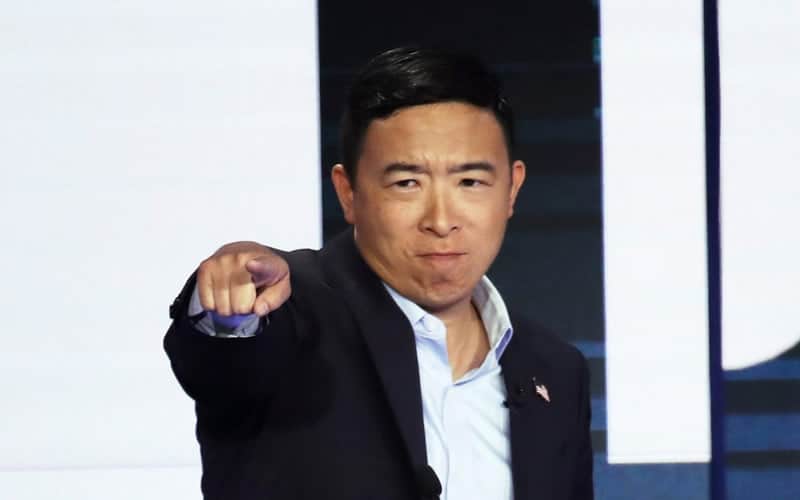 After filling up on the political bets that were dished out before the debate last night, America is now ready for tonight’s encore dessert.

Oddsmakers at MyBookie have released prop bets before Night 2 of the second Democratic presidential primary debate, and entrepreneur Andrew Yang is getting a lotta love from the online sportsbook.

Night 2 of the second Democratic debate is scheduled to start at 8 pm ET and will end at roughly 10:30 pm ET. You can stream the debate live at CNN.com for free tonight.

Below you can find the prop bets for Andrew Yang and the other nine candidates taking the stage, including a breakdown of the chances for each one.

Will Andrew Yang wear a tie for the debate?

Yang made headlines when opted to break tradition and not wear a tie back in June, so the odds indicate that. However, he just posted this on Twitter so we’ll let you make the call because he could be joking around with the #YangGang.

This is a no brainer since Yang is known for his “Freedom Dividend,” which he says will guarantee every American “$1,000 a month” as part of his plan to ease the burden of the country losing millions of jobs over the next decade due to automation. It’d be hard to see him not mentioning a “thousand dollars” twice in just his opening/closing statement.

How many times will Joe Biden say “Obama”?

Biden is known for invoking the name of his former boss whenever he can, but seeing as how that’s been one of the biggest criticisms of his campaign so far, it seems like he’s going to avoid saying “Obama” at all cost tonight. Whether he pulls it off is for you to decide.

How many times will Biden say “Trump”?

Mentioning “Trump,” on the other hand, is completely fair game since he’s the man the eventual Democratic nominee will have to beat to win the White House. Since Biden will be given a lot of talk time due to being the frontrunner in the polls, expect the “Trump” mentions to go over the set total.

How many times will President Trump tweet during the debate?

Donald Trump, surprisingly, didn’t tweet during Night 1 of the three-hour debate, so the value is definitely on the under. However, his pal “Sleepy Joe” takes the stage tonight, so the allure of that alone may be too much for Trump to resist.

Which candidate will have the most speaking time during the Wednesday debate?

Last night, the two biggest names, Bernie Sanders and Elizabeth Warren, got the most speaking time with the slight edge going to Warren with 18:33 compared to Sanders’ 17:45, according to The New York Times.

With that in mind, it’d be hard to see the two top names from tonight’s debate, Kamala Harris and Joe Biden, not getting similar treatment from the CNN moderators. Biden’s 13:19 mark edged out Harris’ time of 12:16 during the June debates.

Hopefully, for the sake of the #YangGang, CNN decides to #LetYangSpeak unlike at last month’s debates.