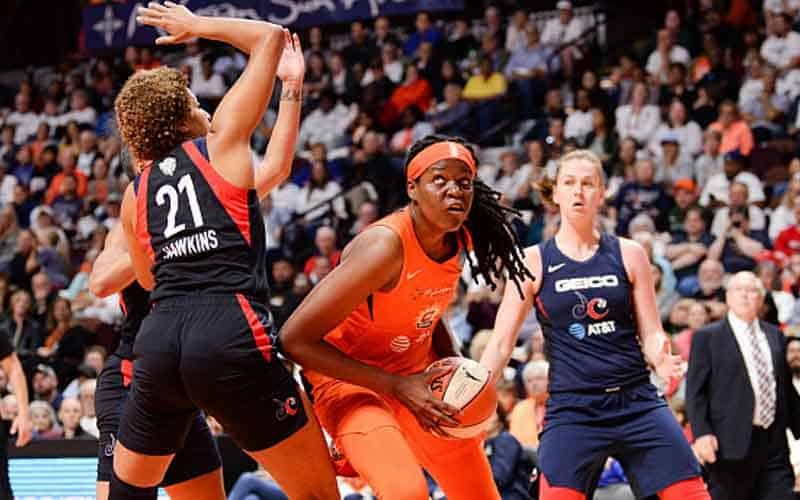 Nothing is more exciting than a winner-take-all game for the title.

For WNBA fans, that’s just what they’ll be getting tonight when the Connecticut Sun and Washington Mystics play Game 5 of the 2019 WNBA Finals.

Despite losing Game 4 to the Sun on Tuesday 86 to 90, the Mystics are favored by 6.5 points at home for Game 5. Regardless of the winner, a first-time WNBA champ will be crowned tonight.

But only one team will lift the WNBA Championship Trophy after all is said and done.

Washington has -280 odds of winning compared to Connecticut’s +240 chances of winning tonight and taking the title. Converted to percentages, the Mystics have a 73.68% chance of winning, leaving the Sun with a 29.41% shot.

Following the victory, Thomas highlighted the team’s unity in the win.

It wasn’t smooth sailing the entire game, though. Leading by 16 at halftime, the Sun allowed the Mystics to tie the game at 68 heading into the fourth quarter. With the Mystics going up by five in the fourth, the two teams traded buckets until Connecticut stopped Washington from scoring in the final two minutes.

“Both teams were making big shots. We’d make a 3, they’d answer with a 3. Ultimately we made a few more plays down the stretch,” Sun coach Curt Miller said about the Game 4 tit-for-tat.

Connecticut’s Courtney Williams, speaking on Game 5, understands the importance of jumping out early as the visiting team.

Injured league MVP Elena Delle Donne was only able to score 11 for the Mystics in their Game 4 loss but says her herniated disk “felt a little better” and hopes to be completely ready for Game 5 tonight.

MyBookie is also accepting action on a few prop bets for Game 5 of the Finals, including the first quarter, first half, and team totals.

At the end of the first quarter, the Mystics are projected to be up by two with an over/under at 44.5. By halftime, Washington is expected to be leading by 3.5 points, with 87 total points between both teams.

For team totals at the end of the game, Connecticut is projected to score 84 points and Washington 90 to seal their championship.