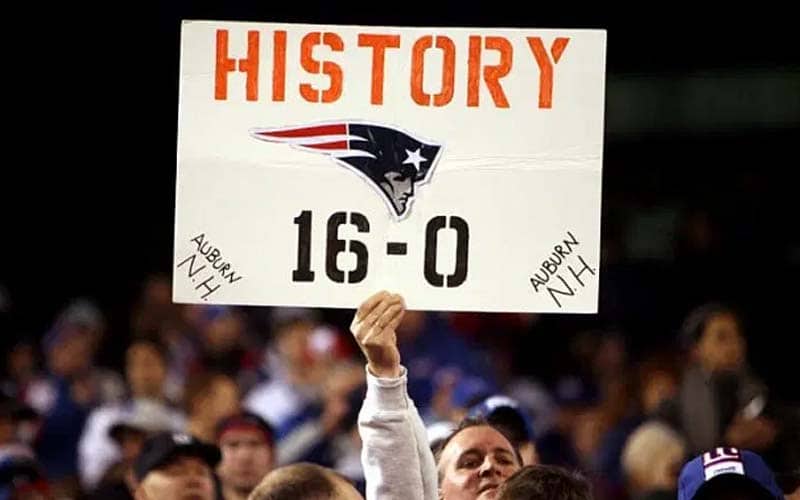 The 2007 New England Patriots are the only team in National Football League history to ever go 16-0 in the regular season.

Despite losing Super Bowl XLII to the New York Giants, the ‘07 Patriots have secured their spot in history books. But can they do it again?

According to the NFL betting odds, probably not.

Oddsmakers at BetOnline are accepting action on another perfect 16-0 regular season for the Pats, but the current numbers favor at least one loss at -500.

Will the Patriots go 16-0 this season?

This is not because the Patriots aren’t playing well enough to accomplish the feat. Their record so far indicates that a perfect season is possible.

The offense is average nearly 32 points per game while the defense is holding opposing teams to an average of eight points with no opponent scoring more than 14 thus far in 2019.

However, some of the team’s success could be due to their weak schedule through the first third of the season. Even Fox Sports NFL joked about the Patriots opponents, comparing them to the fictitious Blue Mountain State and London Sillinannies.

what the Patriots schedule has felt like in 2019: pic.twitter.com/nWdDkYtB1v

ESPN also ranked the Patriots as the team with the easiest schedule this season, setting their projected defense-adjusted value over average (DVOA) of 2019 opponents at -4.9%. Comparatively, the Tampa Bay Buccaneers have the toughest schedule with an opponent DVOA of 3%.

Even with the easiest road to the Super Bowl, there are plenty of reasons the Patriots may not go undefeated. The most obvious reason is the fact New England is still playing a professional football team every week.

No NFL team will just lie down and let the Pats take another victory, especially when there’s a chance to unseat the top squad. This is also implying that the Patriots will play near-perfect every game, which is also unlikely as pros have off-games throughout the season.

The biggest reason the odds probably don’t project a perfect season is rest and safety. If the Patriots secure a first-round bye early enough in the regular season, there’s really no reason to keep playing starters and risk injuries.

Remember, the Patriots lost the Super Bowl after their first 2007 undefeated season. In the grand scheme, 16-0 does not directly correlate to success, especially for a team that has won six Super Bowls since 2001.