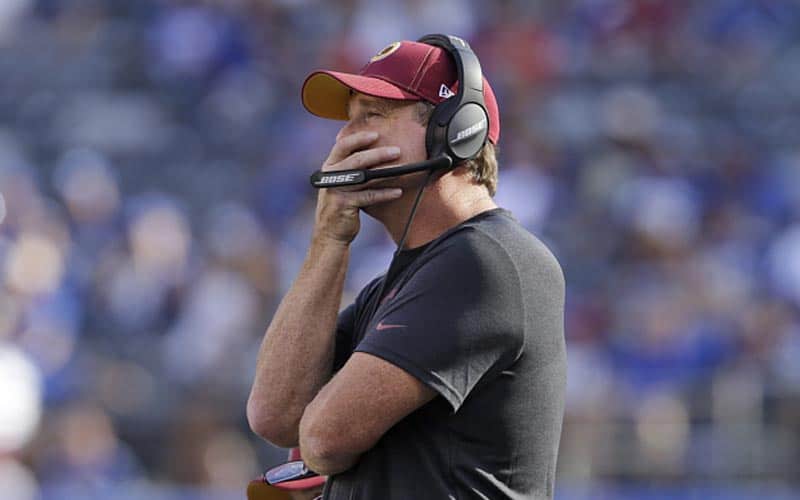 At least Jay Gruden was able to do one thing expected of him this season: Get fired first.

After starting the season 0-5 in Washington, bringing his record with the Redskins to 35-49-1, the team canned Gruden in the most fitting way the historically dysfunctional franchise could: calling him into the office at 5:00 am ET on a Monday to deliver the news.

Bieniemy is a former NFL running back that began his coaching career as the running backs coach at the University of Colorado. Bieniemy has been with the Chiefs since 2013 and became the team’s OC in 2018.

Byron Leftwich, Todd Bowles, and Mike Pettine all share the second-best odds to be the next Washington head coach at +600.

Leftwich, another former pro, is currently the Tampa Bay Buccaneers offensive coordinator after beginning his career as the quarterbacks coach for the Arizona Cardinals in 2017.

Bowles also coaches with the Bucs as the team’s defensive coordinator. From 2015-2018, Bowles was the head coach of the New York Jets.

As another defensive coordinator and former head coach, Pettine is the current DC for the Green Bay Packers.

According to odds released by BetOnline before the 2019 NFL season started, Gruden was on a sizzlingly hot seat and favored to be the first head coach fired with +450 odds.

In a team statement, the Redskins said that the squad was not performing as well as they had hoped for in 2019.

“Through the first five games of the 2019 season, the team has clearly not performed up to expectations, and we all share in that responsibility. Moving forward, we are committed to doing all that we can collectively as an organization to turn things around and give our Redskins fans and alumni a team they can be proud of in 2019 and beyond.”

Since Daniel Snyder’s purchasing of the Redskins in 1999, the team has fired five coaches and two more have resigned. Washington has never had a head coach with an overall winning record under Snyder, although the team has won the NFC East three times, including one with Gruden in 2015.

Gruden’s 2015 NFC East title could be his ticket to his next coaching job. Proving that he can coach effectively, even just once, can go a long way in today’s NFL.

Emerging rumors place Gruden in Oakland with his older brother, Raider head coach Jon Gruden, for the rest of this season or for their inaugural 2020 season in Las Vegas.

Gruden could also become the head coach of another NFL franchise in 2019, depending on the teams’ decisions on their current head coaches.

After giving up 53 points to the Houston Texans on Sunday, the Atlanta Falcons could look to fire the 1-4 Dan Quinn, opening a spot for Gruden.

The Miami Dolphins, giving up over 40 points per game this season, may also be looking to ditch HC Brian Flores in favor of Gruden.

Aside from Quinn and Flores, Dallas Cowboys head coach Jason Garrett is also on the hot seat. Doug Marrone of the Jacksonville Jaguars is another chopping block possibility, although QB Gardner Minshew may single-handedly save his coach’s job.

Regardless of what happens to him next, Gruden getting impeached and removed as coach by the front office might best thing for both him and the Redskins organization. With the record already stacked against them, whoever is the new Washington coach will likely have unfavorable betting odds throughout the rest of the season.