2019 AFC North odds: Wait, the Browns are the division favorite?! 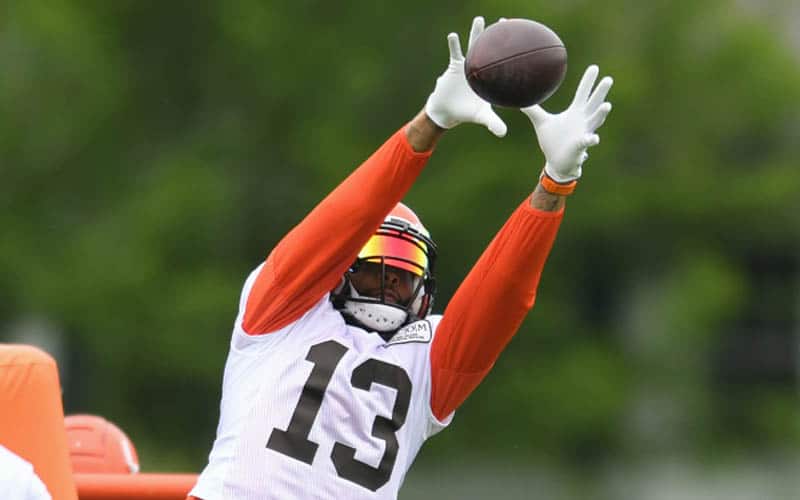 Nope, your eyes don’t deceive you.

Despite never winning the AFC North since the 2002 realignment, the Cleveland Browns enter training camp before the 2019 NFL season as the betting favorites to win the division.

The Browns made a lot of big moves during the offseason, but they are by no means a “heavy” favorite to win the AFC North. The Pittsburgh Steelers and defending division champion Baltimore Ravens have nearly the same chance, according to the odds.

Sorry, Cincinnati Bengals fans: The oddsmakers have made it clear that this is a three-team race to win the division. But hey, at least Marvin Lewis is finally gone, right?

After being the laughing stock of the AFC North for so long — including a 19-game losing streak that finally came to an end last season — the Dawg Pound fan base have high hopes for the Browns this season after the stellar rookie season from QB Baker Mayfield and Odell Beckhamd Jr. being traded from the Giants to join Jarvis Landry in what could be the best WR duo in the entire NFL.

And while the offense will launch an aerial assault on teams this season, the defense — which was already talented — added DT Sheldon Williamson and DE Olivier Vernon during the offseason and stole CB Greedy Williams in the 2nd round of the draft.

A lot of pressure will be on Freddie Kitchens, who enters his first full season as head coach, to turn the talent on paper into wins on the field. The Browns seem to have everything going right for them, so it’s understandable why fans and handicappers are wary of their chances to win the division for the first time in 2019.

It was an offseason that most in Steelers Nation would like to either forget or know that it’s finally over as attention turns to training camp. The departures of RB Le’Veon Bell, who sat at all of 2018 due to contract negotiations breaking down, and WR Antonio Brown, who was traded to the Raiders, mean the team will have to find a way to replace two Pro Bowlers if they want a chance at winning the AFC North in 2019.

RB James Conner and WR JuJu Smith-Schuster will most certainly have monster seasons. It’s hard to tell exactly how much QB Ben Roethlisberger has left in the tank, but the team’s dominant o-line will be more than capable of keeping him off the turf.

The defense ranked in the top 10 last season and got much-needed help at LB by drafting Devin Bush 10th overall and adding Mark Barron during the offseason. If the offense’s supporting cast sets up and Big Ben doesn’t show signs of aging, then the Steelers could come out on top of the division.

It’s not too common to see the defending champs of a division enter the following season by ushering in a new era, but the Ravens are doing just that. It’s QB Lamar Jackson’s team now after trading the notoriously “elite” Joe Flacco to the Broncos.

Jackson started only 7 games in 2018 but managed to lead the team to a division win and a berth in the playoffs. He is an electric runner — posting nearly 700 yards on the ground and 5 TDs last season — but his 58.2% completion rate needs much improvement, or opposing teams will stack the box against the offense all season.

Losing Pro Bowl LB C.J. Mosley and future Hall of Famer LB Terrell Suggs are massive blows to the defense, and it’s hard to see the Ravens ranking as the best defense in football next season. The defense will likely rank in the top 10, especially after adding Pro Bowl S Earl Thomas, but without a top-ranked unit from a year ago, even more pressure will be applied to Jackson and the offense which puts their odds of repeating in serious doubt.

After 16 seasons — and no playoff wins — with Marvin Lewis at the helm, the Bengals organization finally decided that 16 seasons was enough time to see the team was never going to earn postseason victory under their long-time head coach. After parting ways, the team now welcomes 35-year-old Zac Taylor into the jungle to help push the Bengals into the promised land.

Despite the new face, the ownership stresses the team isn’t rebuilding, and so far that’s true. QB Andy Dalton still leads the team and will have a host of offensive weapons that includes WR A.J. Green, WR Tyler Boyd, and RB Joe Mixon — all of which could post big numbers in 2019 provided that they do one thing: Stay healthy.

In fact, when looking through last year’s list of injuries on both sides of the ball, DT Geno Adkins and DE Carlos Dunlap are pretty much the only noteworthy players that survived the 2018 season and managed to play every game. But even with the injuries, the offense finished ranked in the bottom third while the defense was ranked as the worst in the entire league. Don’t expect to see an immediate turnaround for Coach Taylor, which means you can safely count the Bengals out of the running to win the AFC North this year.