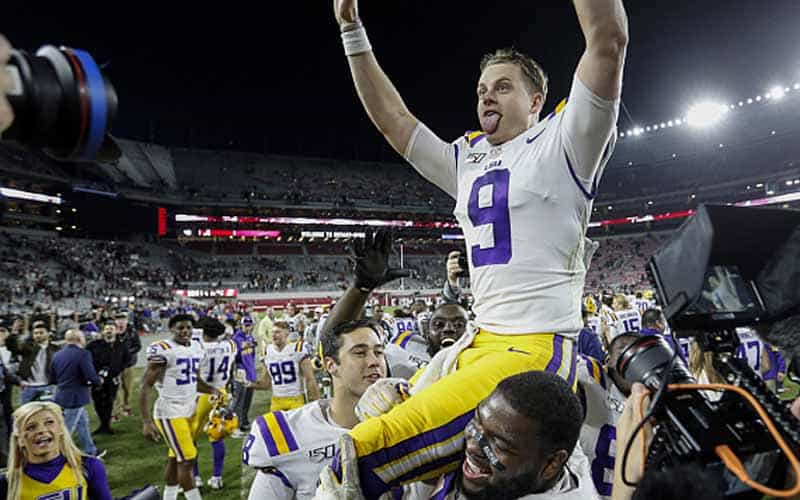 Last Saturday’s high-scoring shootout between the LSU Tigers and Alabama Crimson Tide has more implications than simple wins and losses.

After the Tigers traveled to Tuscaloosa to beat Bama at home 46-41, LSU cemented itself as a true College Football Playoff title contender. Moreover, their quarterback jumped the queue in the Heisman Trophy pack.

In 2019 alone, Burrow has thrown 33 touchdowns and only four interceptions, amassing a QBR of 92.6 over the team’s first nine games.

Odds to win the 2019 Heisman Trophy

At the beginning of the 2019 college football season, Burrow had +10000 odds of winning the Heisman.

For the Bayou Bengals as a whole, Burrow’s performance has catapulted the team into prime championship positioning. Only sitting behind Ohio State (+200), the LSU Tigers have +250 odds to win the college football national championship in January.

Following their loss to LSU, Alabama’s odds dropped to +900. But according to the AP Top 25 Poll, Alabama is still the #4 team in the country. If the CFP poll stays on par with the AP Poll, which it does not have to do, Alabama would still make it into the playoffs if they were to start today.

With their 9-0 record and the current top spot in the AP Poll, LSU controls their own destiny after the win over Bama. The remaining schedule for the Tigers includes Ole Miss November 16, Arkansas November 23, and Texas A&M November 30.

Barring a huge upset, the Tigers will likely finish the regular season 12-0 and play Georgia in the SEC Championship game.

If Burrow were to win the Heisman Trophy and LSU wins the national championship, it would be the first time since Jameis Winston and the Florida State Seminoles cleaned house on the top college football prizes in 2013.