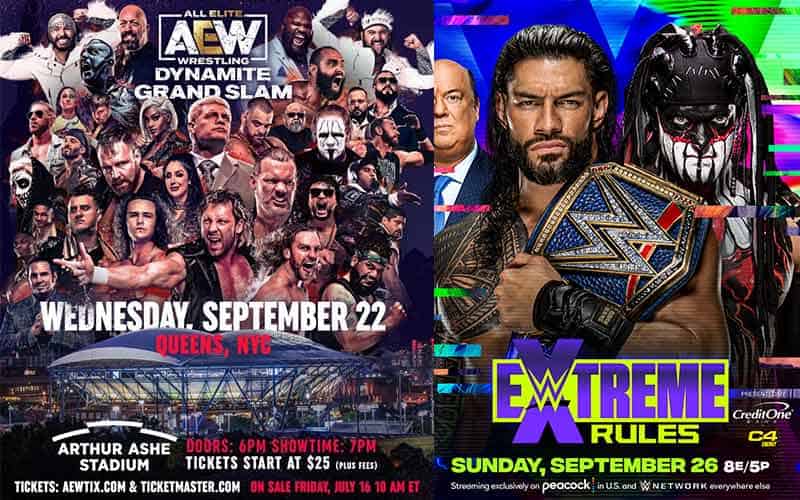 Tonight at Arthur Ashe Stadium in Queens, New York, All-Elite Wrestling (AEW) will host their usual 2-hour Wednesday night program live on TNT to a sold-out pro tennis venue that is deep in the heart of WWE country.

The four-hour wrestling event will be split up into two shows, with the first two hours airing live tonight on TNT as an episode of Dynamite at 8 PM, and an extended 2-hour pre-taped episode of Rampage on TNT this Friday at 10 PM.

Although betting on pro wrestling is still in its infancy, World Wrestling Entertainment has largely dominated that realm with routine odds posted for their monthly pay-per-view events over the past few years now. Although most PPVs have odds provided for them, more often than not, they are limited to a single online sportsbook.

AEW has shown growth in audience size and television ratings since its 2019 debut, and tonight’s event represents a culmination of that success. Their place in the pro wrestling marketplace is further evidenced by its prominence alongside the WWE at entertainment betting sites that offer odds for major sports entertainment events.

Odds for AEW Dynamite Grand Slam appeared suddenly in the middle of this week at not one, but two online sports betting sites, and the below table offers their predictions for tonight’s winners.

There are ample opportunities to line shop for the best sportsbook payouts by comparing the moneylines above and selecting the pro wrestling odds that provide the least path of resistance.

For instance, gamblers can earn an extra $0.30 on the dollar by betting on Bryan Danielson at BetOnline. Alternatively, wagers placed on Kenny Omega’s odds to win should be bet at MyBookie for a little extra wiggle room.

The same cannot be said when comparing the two books and their WWE odds for Extreme Rules this Sunday Night.

The above WWE betting lines are exactly the same at both BetOnline and MyBookie, so patrons cannot gain any advantage by surfing these odds. However, there are a few days until WWE Extreme Rules begins, so there is time for the odds to shift and provide some variance if you’ve got the patience.