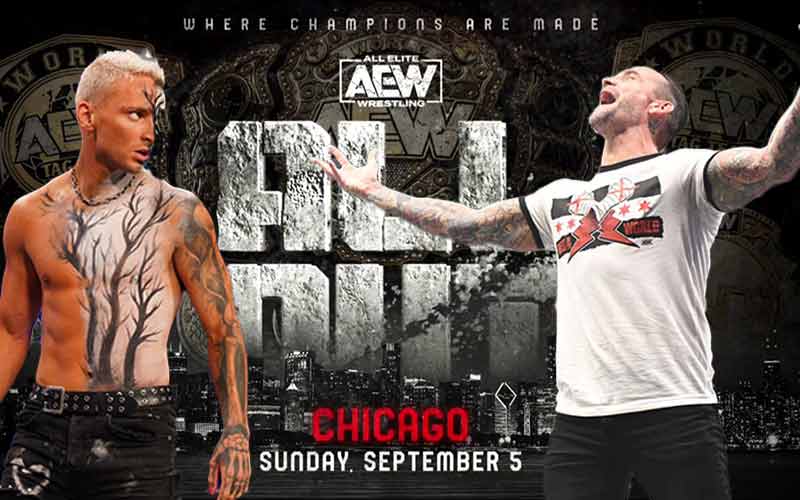 Whether you are a fan of the guy or not, the return of CM Punk to an active professional wrestling roster is good for the industry.

During the 7 years since he abruptly resigned from the WWE, fans in arenas around the nation have been chanting his name in unison, desperate to hear those first few notes of Living Colour’s “Cult of Personality” amplified at loud volume.

Those calls for his return have always been the loudest in his hometown of Chicago, Illinois, and that’s exactly where tomorrow night’s AEW All Out pay-per-view is going down.

Now that the CM Punk odds have cashed in that predicted Darby Allin would be his first opponent, legal pro wrestling betting sites have posted lines for the entire All Out card.

The below Darby Allin vs. CM Punk betting line illustrates that the latter is heavily favored to win his return bout. Their promos have included several mentions of mutual admiration and it has got our staff thinking that Punk could be poised to do the job for Allin.

Online entertainment sportsbooks are offering +350 Darby Allin odds to win, and they may be worth laying a dollar or two on. The reason? CM Punk is so ingratiated with the Chicago crowd and AEW audiences at this point that he could put the youngster over without losing any momentum, and the rub for Allin would be a career-changer.

Blame it on ring rust – the crowd will eat it up! For the highest profits, shop the lines and bet on Darby Allin at BetOnline, and wager on CM Punk’s odds at MyBookie.

Chris Jericho vs MJF Odds For AEW All Out

As one legend returns, another may be making his final performance in an AEW ring as Chris Jericho’s career is on the line when he faces Maxwell Jacob Freidman, aka MJF.

Jericho has lost to MJF three times over the last several months, and the way the storyline has gone thus far, it would seem that he was in line to now gain that elusive victory he’s been so desperately seeking.

The above entertainment prop bet also buys into that logic, but we’re of the opinion that a Chris Jericho retirement is on the horizon, or he is about to take a break to tour with his heavy metal band, Fozzy.

Retirement stipulations don’t mean much in the realm of pro wrestling, as “loser leaves town” matches often only mean an extended vacation for one of the combatants.

Aside from Jericho’s music career, he also has his eye’s set on the commentator booth, and a loss will grant him the time to do so. Bet on MJF!

Line shopping for the best sportsbook payouts is once again on the table as more than one book is offering Christian Cage vs. Kenny Omega odds to win the AEW Heavyweight Championship.

The moneylines at MyBookie hover much closer to even, but both books favor Kenny Omega to win and retain his title. The Kenny Omega odds at MyBookie should be taken advantage of if bettors believe he will be victorious.

Online sports gamblers can earn an extra two dollars for each $1 risked by opting for BetOnline over MyBookie when betting on Christian Cage to win at All Out, although we don’t believe that will happen because an Omega clash with either “Hangman” Adam Page or CM Punk is imminent.

MyBookie offered lines on the Omega vs. Cage and CM Punk vs. Allin matches, but BetOnline has gone “all in” and has posted AEW All Out odds for each and every match, including the Casino Battle Royal.

Casino Battle Royale Winner – All Out

AEW All Out begins tomorrow night at 8:00 PM and can be purchased for $60 on pay-per-view or $50 via the Bleacher Report app.