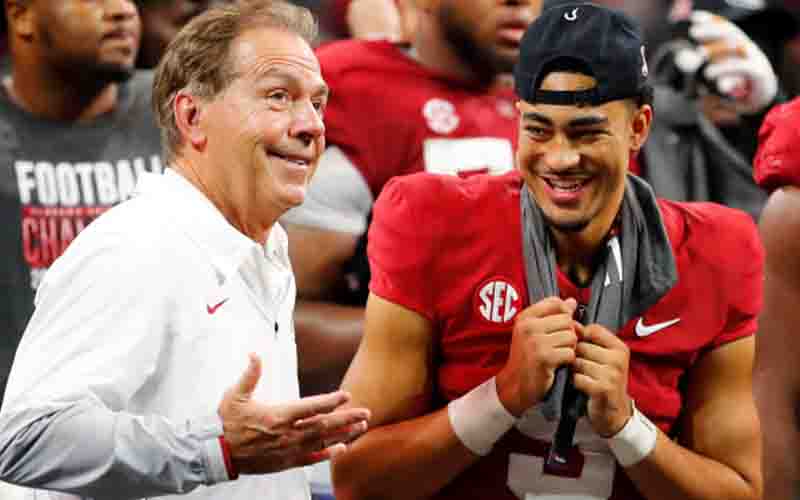 The CFP picture has now cleared up and the Selection Committee has rendered their final decisions for 2021-22. In what was anticipated to be a season that challenged the committee and inspired members to consider playoff expansion in the future, now that the final four teams are in place, everything seems to be wrapped up all nice and comfy.

That is largely due to the Alabama Crimson tide not only covering the spread against the Georgia Bulldogs in the SEC Championship Game, but winning outright by a final score of 41-24.

College football betting sites are now taking action on CFP futures that don’t align perfectly with the final four seedings, and suggest that the Bulldogs and Crimson Tide may collide one more time before the books close on this season.

Then there’s this guy who just won $50,000 by betting $2,500 on the Wolverines to make the College Football Playoffs at BetMGM. The original moneyline offered was set at +2000, but today’s NCAAF odds features the Wolverines at +600. If there were a sports betting hall of fame, this savvy college football gambler should be the first inductee.

Michigan can still net college football gamblers a 6-to-1 gain if they win the title this year, but the odds posted at CFP National Championship betting sites aren’t granting them much of a fighting chance.

The Wolverines’ odds to win a national championship intrinsically convert to a 15% chance of being victorious in their next two CFP games, but that is based on a combination of bookmaker’s projections and how much action was laid on all teams involved.

The following two CFP game lines are suggesting that college football fans will be treated to an SEC Championship rematch on January 10th in Indianapolis.

Whether the Bearcats, Wolverines, Crimson Tide, or Bulldogs win the CFP National Title, no money can be earned without laying some action.

All moneyline odds are currently in the positive for the CFP, but we expect a larger favorite to emerge over the coming weeks as action pours in for each of the final four College Football Playoffs teams.

While the Cincinnati and Alabama point spread that favors the Crimson Tide by 2 touchdowns over the Bearcats appears appetizing at first, which Nick Saban-led program will show up at the Cotton Bowl?

Will it be the Alabama squad that squeaked by Arkansas and Auburn, or will it be the mighty Crimson Tide that blew out the Georgia Bulldogs by 17 points on Saturday.

We’re laying off both CFP semifinals point spreads but if we had to wager on one, it would be Georgia covering the -7.5 against Cincinnati.